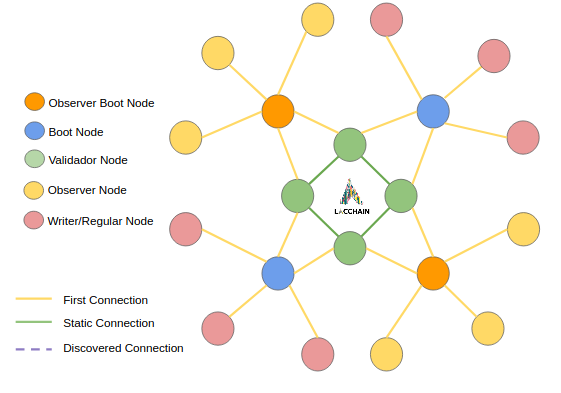 Core nodes play an essential role in the correct functioning of the network. The network can’t work without them. Core nodes are classified into validator and boot nodes.

Validator nodes participate of the consensus protocol. They are responsible for the generation of on new blocks. Validator nodes are only connected to each other and to boot nodes for security and efficiency purposes.

Boot nodes act as a liaison between validator and satellite nodes, which implies that (i) they listen to the writer nodes and pass along to the validator nodes the information about the transactions generated by writers, and (ii) they update the satellite nodes about the new blocks generated by the validator nodes. They are also responsible for setting up new nodes by providing them with a list of active nodes in the network, the latest version of the blockchain, and other relevant information such as whitelists and blacklists. Boot nodes are connected to all the types of nodes in the network.

Satellite nodes do not play an essential role in the correct functioning of the network. The network works without them. Satellite nodes are classified into writer and observer nodes.

For a P2P network work properly, there must be a good implementation of node discovery that allows a node to discover other nodes in the network. The discover protocol implemented in LACChain Blockchain Networks based on Hyperledger Besu to build the peer to peer network is based on Kademlia.

Kademlia is a well-defined distributed hash table recognized as a robust standard and protocol. LACChain Blockchain Network inherits from Ethereum (the underlying technology of Hyperledger Besu) the use of the discovery part of the Kademlia protocol.

The blockchain networks orchestrated by LACNet use UDP protocol to exchange information across the P2P network. The steps to achieve the discovery of nodes in the network are the following:

Once discovery is successful, nodes can have peer-to-peer communications over the LACChain Networks based on Hyperledger Besu. Communication consists in sending and receiving messages between nodes. For data transfer, Besu protocol relies on the RLPx Protocol. RLPx enables nodes to transfer encrypted and serialized data through encrypted multiplexed messaging.

This protocol leverages Elliptic Curve Integrated Encryption Scheme (ECIES) to establish secure communications between nodes using public key infrastructure and elliptic curve cryptography. After the handshake, both nodes send to each other which protocols and which versions of these protocols they support: The Ethereum protocol is “eth”, the Ethereum’s Whisper protocol is “shh”, and the Light Ethereum Node Subprotocol is “les”. The subsequent messages are dependent on the protocol chosen.

LACChain Networks based on Hyperledger Besu use IBFT2.0 consensus protocol for the validation of transactions and generation of new blocks. This is a Proof of Authority protocol that eliminate high carbon emissions involved in other consensus protocols such as proof of work. Additionally, all validator nodes in LACChain Mainnets are contractually committed with LACNet to follow certain rules that guarantee the resilience of the network without crypto incentives. For node operators to propose and discuss updates and changes in the LACChain Networks, LACNet coordinates discussion working groups. All of these guarantees that:

In LACChain Networks, validators do not compete to produce blocks, but rather take turns. As such, finality is instantaneous and new blocks are always appended at the end, never rewriting the history. If there were an attack by a majority of validator nodes trying to rewrite the history, any honest node in the network (including validators and not validators) could simply refuse to accept it as soon as the honest node finds that the hash of the block previous to the last proposed block does not match with the hash in the latest version of the chain the honest nodes have.

Additionally, we have developed a protocol to rotate validator nodes in a way that maximizes performance and decentralization.

Networks Based on EOSIO

Despite not yet orchestrated by LACNet, the LACChain Alliance has developed and maintains a Testnet based on EOSIO technology. You can find all the details about it here https://eosio.lacchain.net/en/.

Networks Based on Other Protocols

The LACChain Alliance and LACNet are agnostic to blockchain protocols and recognize the benefits of many emerging blockchain protocols. The research team is constantly following these progress and more protocols are expected to be incorporated into the stack of networks orchestrated by LACNet soon.

There are two types of LACChain Networks orchestrated by LACNet, the Testnets and the Mainnets. The Testnet networks are free. In order to deploy a node, it is required to file a very short registration agreement form as well as reading, understing, and agreeing with the terms of reference. Find the details for the permissioning process here.

We are agnostic to blockchain protocols and have already enabled networks using Hyperlderger Besu and EOSIO technologies.